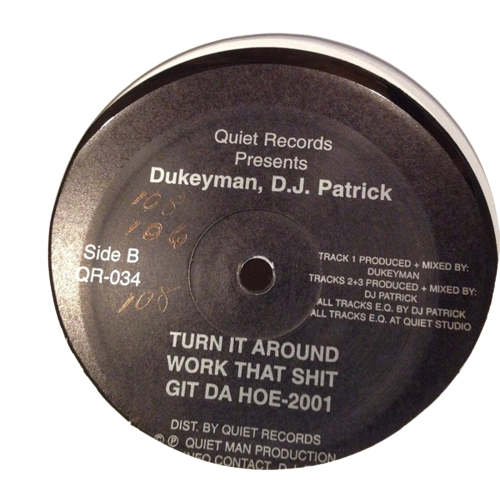 Pretty leftfield as these things go, this is one of a number of multi-artist cyphers that Quiet Records put out around the turn of the millennium. Because it’s fun to mythologize, I’m more than happy to attribute 80+% of the weird brilliance of these tracks to “Troy Brown,” a virtual ghost save for one other Quiet release (QR-020, Clap Yo Hand - for the record I’m quite sure that the Discogs entry thereof confuses this Troy for another guy who was active around the same time, but is quite clearly Canadian).

Anyway, the primary point of interest here is “Who Shit Is This,” built around a bonkers manipulation of an uncredited female vocal, a squeaky harmonic on “whose” surgically removed and arpeggiated (better still, played as straight eighth notes on the dub mix). It’s chaotic and half-danceable at best, complete pervert shit for the in-too-deep.

IMO the other big highlight is “Work That Shit” from the Dukeyman side, which similarly syncs up a vocal sample and MIDI bass trigger and runs the latter up and down a chromatic scale. The eventual appearance of a break, for maybe 45 seconds, is basically a footnote. I’d love if this were to be proven wrong, but I’m guessing this is probably the closest Baltimore Club ever got to prefiguring the work of Lorenzo Senni.

The other sick thing about this release is that it introduces an all-time esoteric merchandise possibility - a hypothetical Baltimore Bullets throwback of erstwhile Washington ‘Zard Troy Brown Jr.