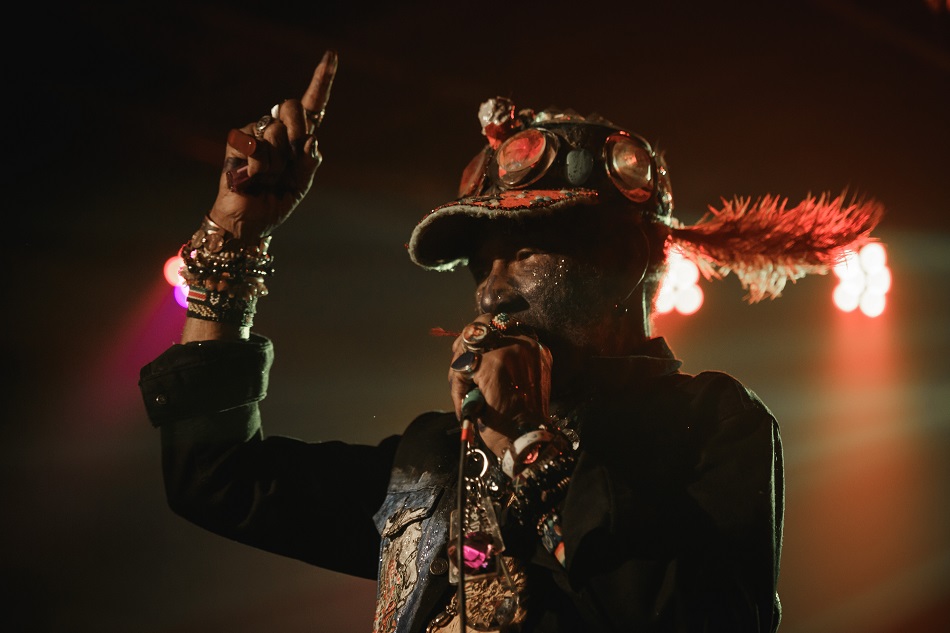 Lee ‘Scratch’ Perry is a pioneer of dub music, known for his production work with his studio band The Upsetters as well as a wide variety of other acts. Throughout the ‘70s, his studio the Black Ark turned out numerous landmark records, including Blackboard Jungle, often cited as the first album of the genre. He’s since gone on to collaborate with artists ranging from Bob Marley, The Congos, and Max Romeo to the Beastie Boys, The Orb, and Andrew W.K.

I read that you don’t go back to Jamaica much.

Well, my way of thinkin’ was different. We go to set school, but we don’t learn the same thing in school. I didn’t hear anything they sayin’. That was perfect. So it don’t reach anywhere with me. My teacher was not good for me, because what me want to hear, he could not present it.

But you were able to learn at Studio One?

I don’t go to learn anything at Studio One, Coxsone. What me learn from Coxsone was he is a user too. You have a user. Duke Reid a user, Coxsone was a user. All o’ them - Tubby was a user. They are parasites. Bloodsuckers.

I’ve heard people talk about the early dub scene as “competitive." Were you competing with -

Tubby? I wasn’t competing with Tubby so much as I was competin’. People compete with me, they die.

What was it like to come together for collaborations?

Well, because music is a government. Music is God power. But the devil want to have it, so he want to steal it. So some of the people who the Devil can’t buy them soul, them price, or them money, catch them vibe from me. They need his power. They need his energy. So they are them a thief. So that’s the song I’m singing, “Black Ark Vampyres." I try to say that I think the shadow is black, so God is the power of blackness. But then I discover the truth that I speak: the devil also knows that the God power is black. That’s why him steal it, and use it for black magic.

Is it difficult to sell or give away such personal music?

What were your goals in creating Black Ark?

Jesus, not me, [indistinct]. Me know that me shouldn’t get involved with that. And that’s the mistake me make, after me learn me make a mistake. Me burn it down. It’s a church me have, and me a have a dancehall. Church! Me’s a church man, me not a dancehall ragamuffin. Me is a holy God man.

What made you to burn it down?

‘Cause me call it “Black." And that’s where the devil works. In the darkness. So the devils were feeding from there. To copy, to copy God brain. To fight against God. 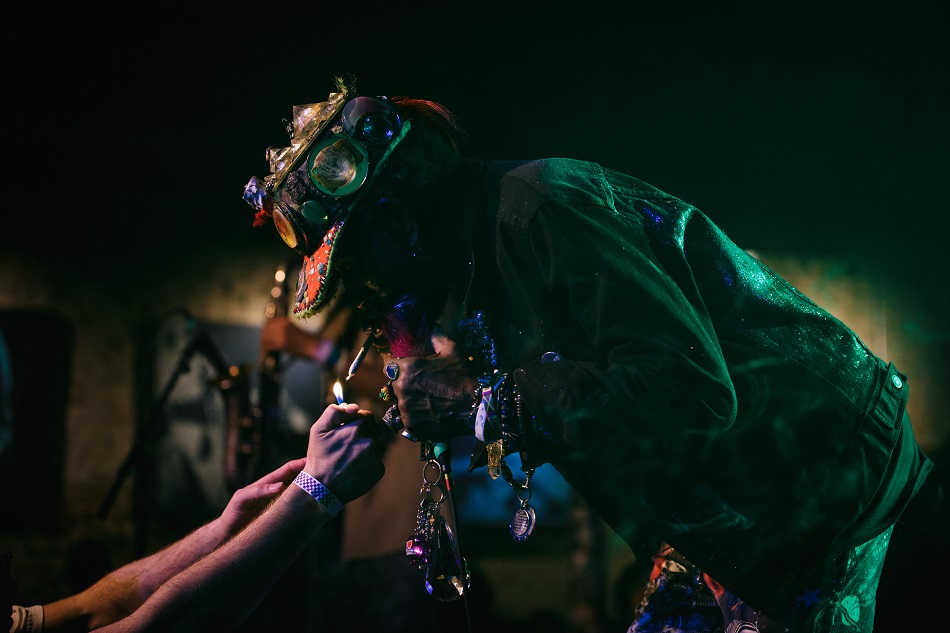 Dub is sometimes described as being from the Earth.

And when people say that they take influence from dub, what do you think that means to them?

Well, one part of the dub is the brain. So it’s a living God. And the other part is the heart. Our brain, and our hearts. So you start from the drum. The drum is the heartbeat. And next when you need something, you come to the brain. Ask the brain, “why the heart need?" The heart may be sick, heart need a doctor. [sings] I need a doctor / for my reactor [laughs].

Can you make a version out of anything, or does the original track need some special quality?

I’m a creator. Everything I do is work. I am a creator and a destroyer. I create something, and if it not work in a way it’s supposed to work, I fuckin’ destroy it. I create something else, replace it. I am a replacer. A creator, a destruction - a destructor, a wrecker. Also a killer and a life-giver. I give life, and I kill life. I take life. I give energy and I take energy. Because if I give my energy, which is good, and you turn it upside down… I want it to have two face, and I play a devil.

How did you come to meet Bob Marley?

Was it easier to work with reggae musicians than other producers?

How do you go about translating that spiritual element for listeners?

To the people. You listen. God is a spirit, and God check the people he want to talk to. He’s visible - God is in the air, and in water, the water. So he walked on the water, and the water didn’t know God on top of him. For the water know God have a power, a magnet power. So him feel the magnet’s power, so he know God. Everything God do, he did water and he did fire. You understand? So God is real, the dub is real, and the dub selects some people to follow him, the dub. God didn’t want [indistinct] the people - the dub can heal the people, and the dub can heal the people. And the fire can - when you’re cold, the fire can make you warm, understand? [tapping portable heater] this is God too. And the water, too, is God.

You’ve said that the body is nothing - what informs how you dress?

The body is something, the body’s a temple! Your body is your church. Without a church - your body - you’d be invisible. Without no body. So, because him know, he want to make him. So him gon’ have to find a nice girl. To recreate yourself, and make another baby. That when you get old, before you get old, and start to have a new age. Because God people funny, you know. God made them to have one age. And after the devil find out that, the devil come with a thing. New age. But there is nothing new under the sun.

Has your spirituality changed since you were younger?

Yeah, yeah, two people live in me. One you can see, and the other one you can’t see. So the one outside send me to help some people, and then the people are evil, and they will eat me alive. Then the one inside can run away. Before my adoption, I am a fish. I’m a Piscean, so I’m a fish. But some peoples are greedy, they want to eat me all up. And they won’t leave any of me. So when God see that God say no, leave those motherfuckers. I’ll kill them. I’ll give them cancer.

How did you choose to move to Switzerland?

They’re not poor, and poverty’s a curse. I may as well, me say it clear like this: the people… poverty’s a curse, not those in poverty. To be poor, nothing can be worse. They trouble what you do, and your business. And if you want to be rich, [indistinct]. Back when I lived in Jamaica was poverty, there’s nothing worse.

Where were you drawing inspiration from for some of the more unusual recording techniques that you’d use?

What I’m saying to you is water, and fire, and shit. Me don’t know about people. Me not have anything to do with people except me need them to work for me. ‘Cause me don’t need people too much. Many because of poverty I go on, I got rid of some people. Me hate poverty.

Do you think you have the power to change it?

Of course! There is no power me nah have. 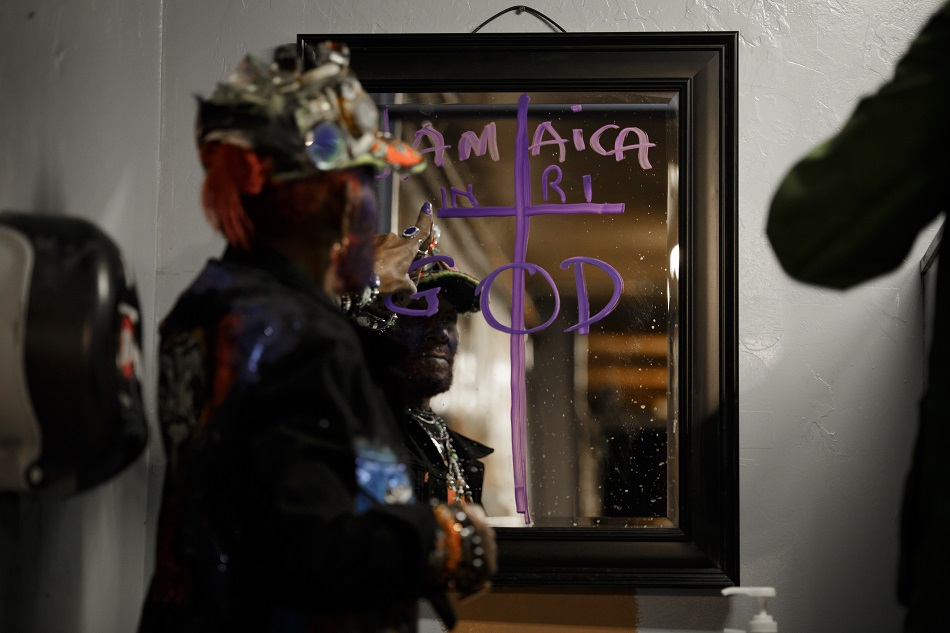 I read that you’ve gone sober at times - would you ever ask the same of your fans?

My fans are students. And they’re intelligent. All my fans know the truth. They’re not stupid. And I know, me not for myself, want to teach them something. And they are learning something - every one of my fans learn something. Those that don’t learn anything… maybe Bob Marley didn’t learn anything.

Who do see at the venues? Who are your fans?

Angels. Me see living angels and fallen angels, everything mixed together.

How do you like to see them react to the music?

If they’re smart enough to listen to what I’m saying, them should have the sense to take pen and paper. I don’t keep a dancehall, I keep a church, so you write down something me say, so you can understand. Why are people looking for a new age when there is nothing new under the sun? Then you could check that those people are different people, because if there is nothing new under the sun, how them looking to make a new age? It’s the devils! Baphomet.

What was it like to work with musicians from outside of the dub tradition, like The Orb? 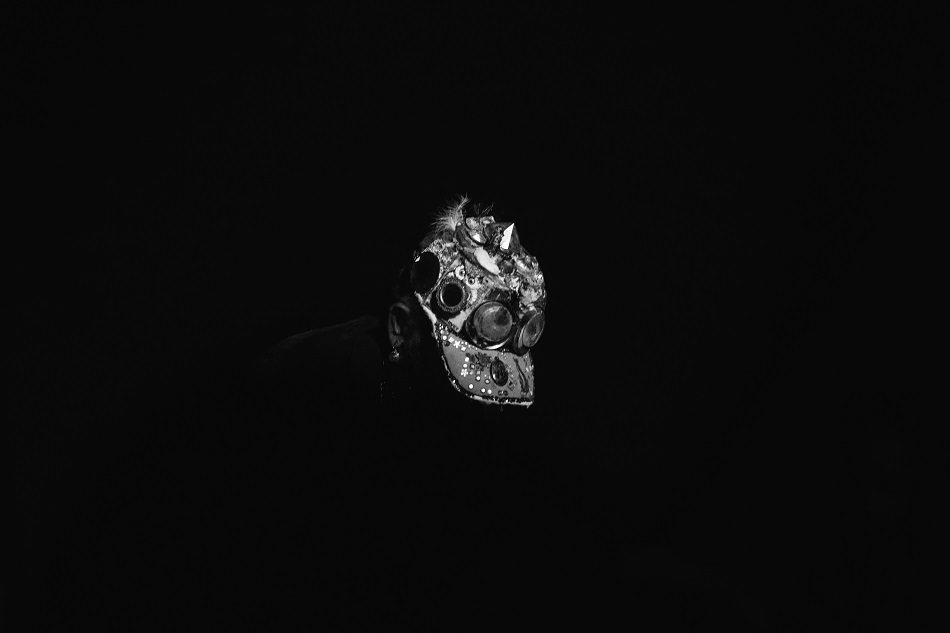