The Sonic Landscape of Utah 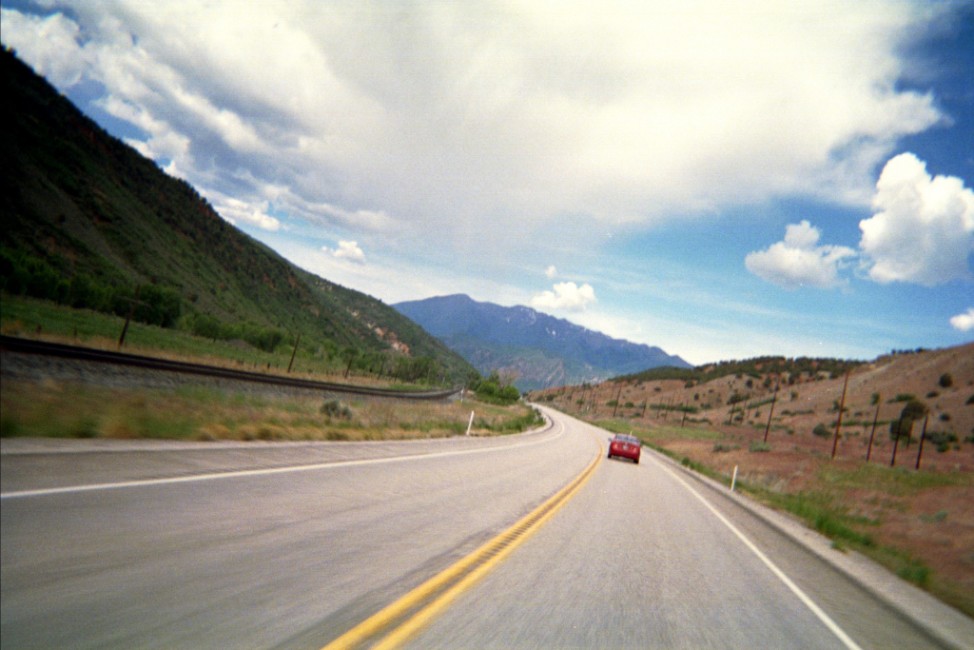 At some point in my childhood, I inherited someone else's massive, space-consuming collection of National Geographic magazines - some twenty years' worth. This was not, as you might expect, the happy accident which birthed my love of nature; it was, however, my introduction to the craven commercialization thereof towards which all Earth-focused publications trend. In that sense, this trip was an inevitability - myself, two Hip Replacement day ones along for the ride, and a third making appearances in both Denver and Salt Lake City.

I'm joking, of course. I have never, ever, more than a couple of times, ever, thought of you all as "my subscribers," rather than, say, "my friends" or "my parents." Nik and Sam and Kelly (the same Nik and Sam and Kelly who have been mentioned previously, by name or otherwise) really did come through though. 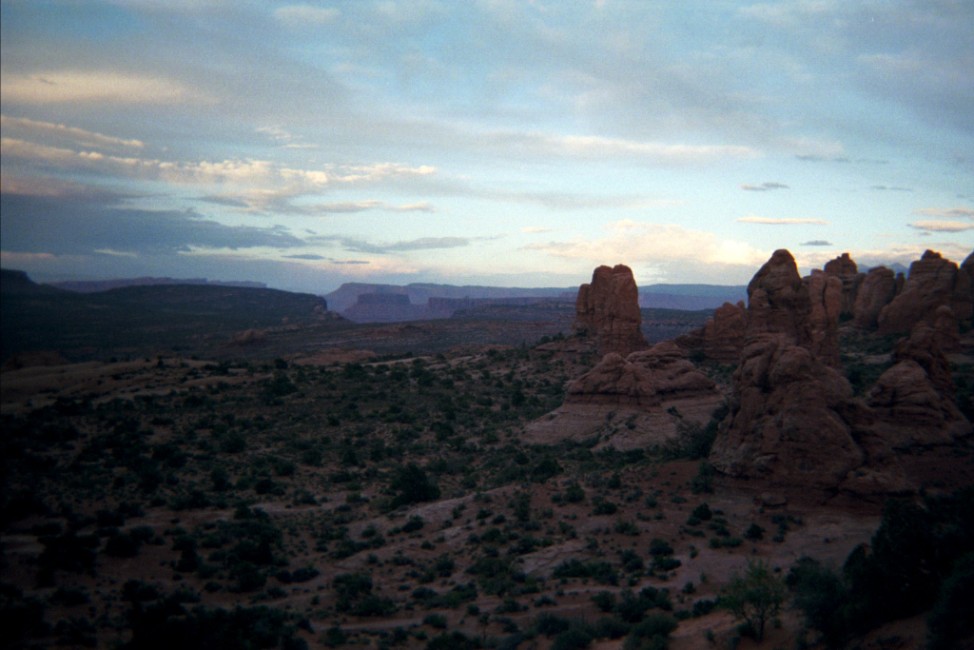 Almost as early as planned on the morning of Memorial Day, we set off along Interstate 70, the finer of Colorado's two roads, hoping to make it through the mountains, the canyons, and the mesas that unfold in that order before the forty miles of absolutely nothing which introduces Utah. Arches, the ultimate destination, was insanely worth the trip (which takes five or six hours). It's big, as National Parks go (we thought), with a central road that takes probably 45 minutes to see in full despite several extended sections with speed limits over 40mph. It defies the slow reveal, too - you're driving along a desert road, when suddenly there's a massive cliff face on your left that you have to zig-zag up. At the top, suddenly, lies the full expanse of Arches, a place that I have repeatedly described as a fairytale kingdom where Gaudi is the only architect and red rock is the only building material. To make matters weirder and more foreboding in equal measure, we arrived during what looked like (but did not end up being) a massive thunderstorm, and with Midtown 120 Blues blaring.

I don't think that any of us can actually explain the arches. The Earth, or at least the whole Southwest US, was almost entirely covered in water at one point (a better time), which means that any cracks in the ocean floor tended, with time, to widen and deepen by way of erosion. As we approached the current, shit era, the uber-ocean drained and left rows of ridges with deep crevices in-between them. Over still more time, and in a manner entirely incomprehensible to me, these ridges tended to break down into arch form, i.e. retaining their outer edge but developing big holes that work outwards from their center. What this means, practically, is that hiking around Arches consists of continuous movement up, down, and along the spine of big-ass rocks, looking down a lot of deep crevices, and finding it difficult not to feel insignificant both physically and emotionally. 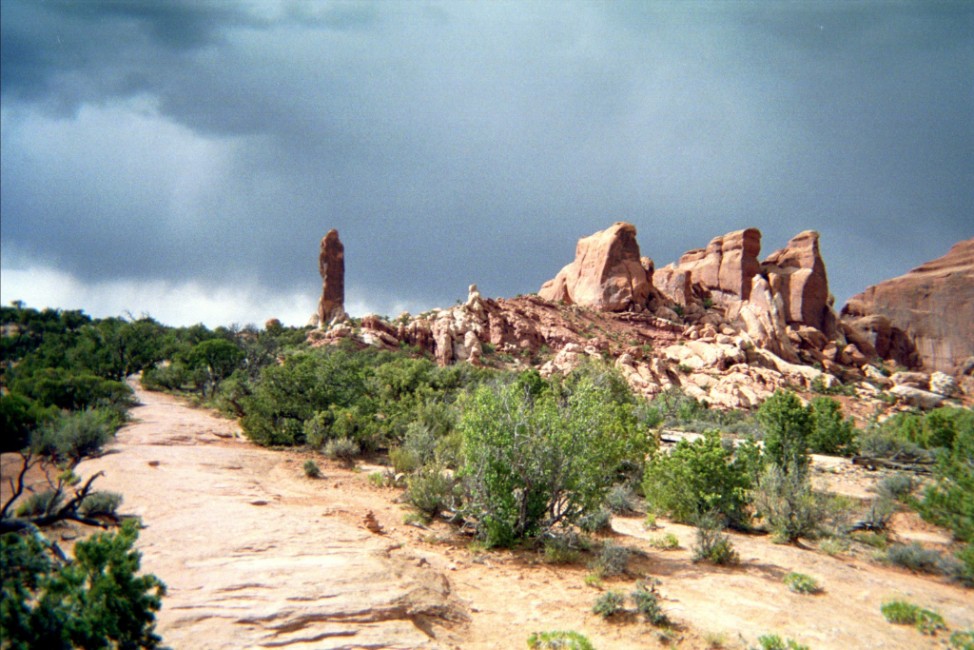 Moab is a city with the good fortune to lie right in the middle of Arches and Canyonlands, and it's a bit like Nantucket or Myrtle Beach in that the visit implies the intention - in this case, hiking, mountain biking, or off-roading (I heard repeated, tantalizing reference to a "top entrance" of Canyonlands). Despite this - "this" being the wealth, the thin-blooded old people, the inherent incompatibility of Utah and any sort of city experience - it's a nice-enough place. We got some great quesadillas right after arriving, and made repeated visits to the one restaurant that was open until, like, 10pm. A waiter there recommended some BLM land to camp on that we found on our third try, the first ending with a very scary "do not enter" sign (amplified, of course, by the time and the place) and the second with a comically impassable stretch of non-road which we nonetheless passed until it ended abruptly at a fence. Our neighbors at the adjoining campsite were having a thoroughly entertaining conversation which Nik, reasonably and foolishly, was uncomfortable recording; the gist was that their child told the mom that the music she was playing sucked and got a lecture, way longer than she or any of us bargained for, about how sometimes people are going to play music that you don't like; that much of that music might even be popular and bad, and that it was important not to allow people to make fun of you because they thought your music was uncool. The song in question was by Bon Jovi, I'm pretty sure. 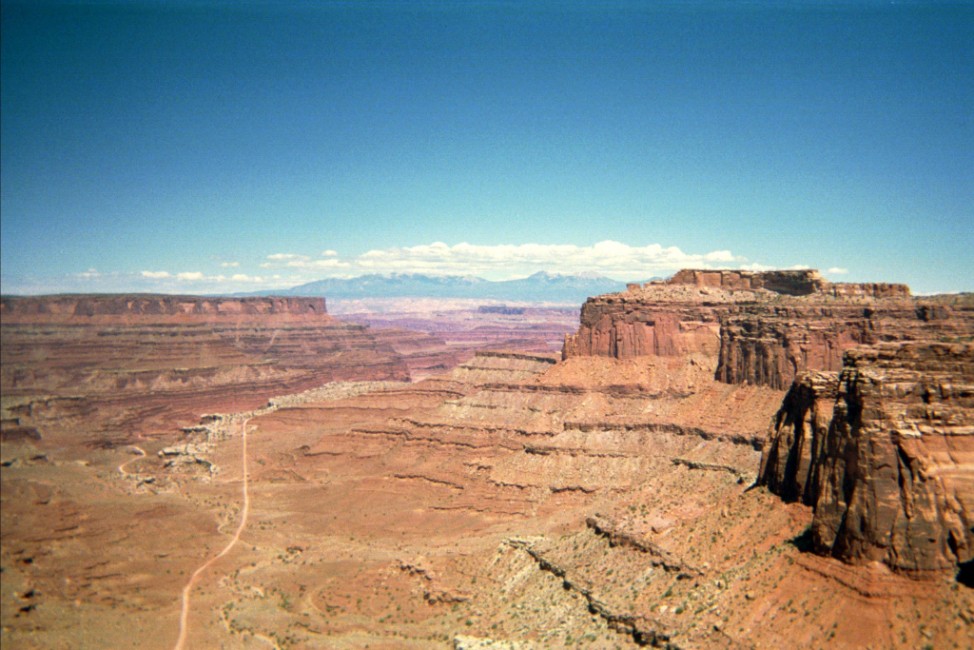 Canyonlands is a little atypical in the sense that its primary attraction (the canyon... lands) is so massive that there's very little interactivity - you can walk or drive around and get different views of the things, but the canyon faces themselves are totally impenetrable. This means that the park, as a whole, is far more viewpoint-oriented than is normal, facilitating a lot of pull up/take a picture/move on action (it's also, contra Arches, real-deal huge - the park is split into two sections, which don't connect, and the entrances are some sixty miles apart). This worked out pretty well for us; we spent an inordinate amount of time on one of the only actual trails, looking for some kind of spring that may or may not have existed at all. The third or fourth time that we noticed that the trail simply led further down the canyon (i.e. away from the road, the park's other visitors, the one source of water in the whole place), someone had the bright idea to check Google Maps, only to discover that we were approximately the length of the trail away from... the trail.

We did make it back, obviously, passing some people en route who were about to make the same mistake we had and, despite our very clear explanation of the mistake they were about to make, fucking continued down the objectively wrong trail. I assume they're dead now. Being, by contrast, alive, we took to the (dirt) streets and cruised around the rest of the park on four wheels, deliriously listening to Playboi Carti and hopping out to take in views like the above from the safety of, uh, the edge of a cliff. 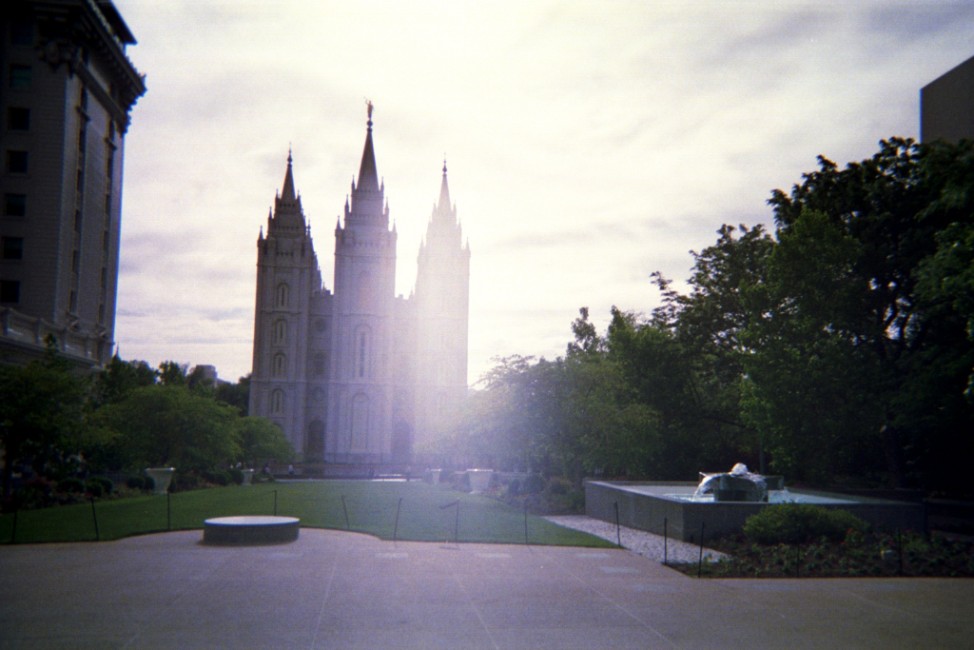 It's common knowledge that Salt Lake City isn't like the rest of Utah; that it's a liberal enclave in a red, Mormon (do the Mormons also have a color?) state, a hidden gem that, really, is just like anywhere else. This, my friends, is a bald-faced lie. Salt Lake City is, on the whole, fine - a strong "neat" on the Knoxville, TN <-> Denver, CO spectrum of medium-sized cities that happen to host their state's government. However, at no point is it remotely possible to forget that you're in some kind of bizarro holy land for the world's least-persecuted religious minority (something called the Utah War did, apparently, happen). This is made obvious by the requirement that you order food before being served any normal beer in a bar, by the fact that some jokester of a brewer has committed the arch subversion of naming his (just a guess) beer "Polygamy Porter," by the massive and extremely well-kept temple complex that is at the center of the city (and relative to which all streets, e.g. 500 South or 300 E, are named), and by the never-ending tide of extra-strange Mormon facts that you'll either be told about or pick up by osmosis immediately after entering the city (the temple that you attend is determined, non-negotiably, by your address; the one exception is for young, single Mormons, who have a specific, extremely horny temple all to themselves for the duration of their single-ness). Late-night (i.e. open 'til 11pm) cookie shops are enormously popular, admittedly for good reason.

It's cool, though; there's a non-zero population of normal people, and the appeal to nature-types is pretty obvious. The land behind the capitol backs up right onto a mountain, and it's totally possible to be both in the city and at the trailhead of an impressive hike. There are some nice parks. Kelly's brother and sister-in-law live there, and in no time at all have apparently found 100% of the cool things to do. It is, without any malice, an exceptional city in which to do very little. The Thursday that we were there, Sam and I sat on our Airbnb's porch for nearly the entire day, pretty-to-very satisfied with how things had turned out (I also had a Hip Replacement to write - the interviewing one - even more belatedly than usual). ye dropped that evening, and we gave serious consideration to driving to Jackson to see... whatever there was to see. We didn't, luckily, because I think everyone knew deep down that the album was going to be bad. Nevertheless, anything seemed possible in the chaos preceding the album's release, a remarkable freedom to have in a town noted for its religious repression. Kanye still stops the world when he drops an album, and probably always will.

There was supposed to be more audio, but it came out pretty poorly :(. It was mostly wind, anyway, which is both accurate and insufficient. I leave you with this clip of an exceedingly wild Thursday night bike ride, seemingly the liveliest thing Salt Lake City has going.