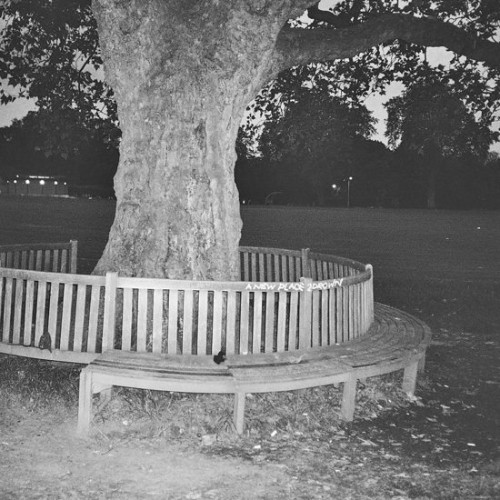 I’ve written more than enough about King Krule (real name Archy Ivan Marshall) already, I’m sure, but never about my favorite of his albums. I still don’t really know a lot about A New Place 2 Drown; it came out at the very end of 2015 and escaped any meaningful notice beyond half a day’s worth of tweeting and, if I recall correctly, a non-committal but generally on-brand nod of approval from Pitchfork. It’s one of the first albums that I considered reviewing, in those weird days where I had no venue for publication and no sense of the music writing world and big hopes about being a professional writer of some sort (both of the former are required for the latter).

I’ve praised basically every album I’ve ever loved for its ability to convey a mood, and for dour ones A New Place 2 Drown is effectively unmatched. For the most part, I’ve no idea what is said/sung on here; what I do catch is a lot of *crooning British coal miner voice* "well fuck my mental health" and "girl, this place is evil" and altogether too personally, "lanky piece of shit." A friend of mine who might not want his name associated with the anecdote played the new King Krule album for his girlfriend and she shut it off immediately after the opening line: "she thinks I’m bi-polar…" - I would venture that the music was not unappealing but instead simply fast-acting.

Because it’s so effective at putting you in a state, I’m not sure that anyone listens to the album from front-to-back so much as on a loop. The production makes it a bit difficult not to, really; songs are relatively discrete units but the structures therein are entirely unpredictable. Instruments and samples are mostly recognizable, but appear moreso as collage than in a given order or ensemble. King Krule makes beats under some other name, and it’s really obvious. The instrumentals share sonic and rhythmic sensibilities not only with Bandcamp’s golden era of amateur beat-making, but also Earl Sweatshirt’s late-era self-produced work, particularly I Don’t Like Shit, I Don’t Go Outside. The two albums share more than young fanbases; they’re both totally inscrutable, leaving a clear foul taste in the mouth but not elaborating any further on what exactly it is that’s wrong.

I went to a King Krule show last week (the first that I’ve had to pay for in Denver). The dude’s a rockstar. The Archy Marshall material went untouched, as might be expected - he’s touring on a new album and a multi-year discography that, as far as I can tell, has a lot of hits. I don’t know if it’s the onset of the playlist era or what, but the very collegiate crowd went wild for and from the first note of nearly every song, while for me the primary characteristic of his music has always been its ability to blur into a single mass (yet again, the children wrongly appreciate Artworks!).

There’s a lot of howling included in the King Krule live experience. I stood about as far as I could from anyone else, Archy most of all, but it did nothing at all to lessen the effect of the demented Tintin leaning over, under, and around the mic to punctuate any given line with a roar. In perhaps any other situation, one might call it "rousing," but I’m not sure that pure anguish is within the scope of the word.

Of the relatively few merchandise options available, the most expensive was "Dickies Jacket," at $75.

This has fallen a little flat, I think, and I apologize - I really do love the album. A surely not-insignificant part of this is that I’ve been listening to it for almost two hours now, quite a bit longer than most doctors recommend for a single sitting. What I’d like to say is this: I’m in Belgium right now, sitting alone and outside along a river as the hour (and this newsletter) grows quite late, and I’ve only just realized that the train sounds that have underlain the last several minutes of music were actually coming from the outside world. As for the rest, I'm not yet sure.