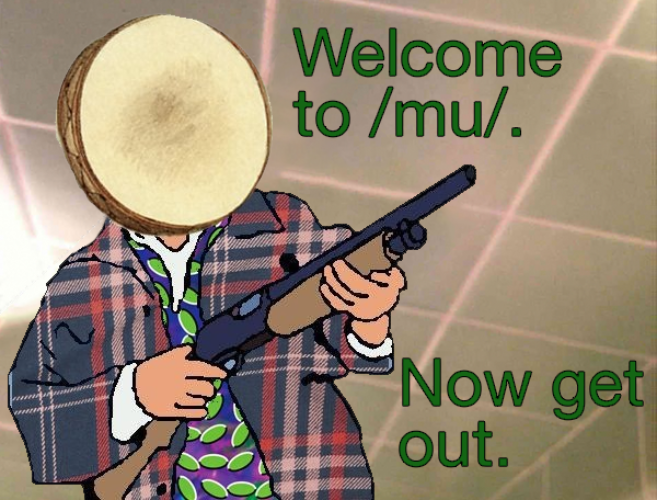 I was a teenager once, and more recently than I would like to admit. I was unsupervised after school, vaguely angry at… existence, and had more idle hours than I appreciated at the time. Inevitably, I found 4chan. At this point in most peoples’ internet story, one proceeds directly to /b/, the site’s infamous “random board and something of a rite of passage for the young and bored. Alas, the internet filter on my family computer blocked it (the first of many happy accidents along this path that, to cop a phrase from Twitter, I think about a lot). More interested than ever, I settled for /mu/ - the music board.

This would have been in February or March of 2009 - Grizzly Bear’s Veckatimest leaked within my first few days on the site, and people were making a very big deal about it. At the time, I was into metal pretty exclusively; my interest in music had a similar depth, but much less breadth, than it does currently. That was about to change. The linchpin of /mu/’s culture was the sharethread - massive, sprawling lists of Mediafire and RapidShare links to albums of every conceivable genre. Requests were allowed, but often ignored, and it was more fun to choose blindly anyway. Intrigued by the album art, I downloaded Massive Attack’s Mezzanine. Outside of the early morning MTV canon, I don’t think I’d ever heard a song without a guitar, and nothing could have prepared me for “Angel. I remember the moment I pressed play very clearly still, and I’m not sure that a piece of music could possibly have that effect on me again.

/b/ all but forgotten, I dove headfirst into the /mu/ experience. I can probably still piece together the first ten or so albums that I was put onto; I made the small leap from Massive Attack to Portishead, and then to 808s & Heartbreak and A Kid Named Cudi. Death from Above 1979 was still very big at the time, as was an odd band called Amesoeurs that I haven’t heard about since*. In time, I tried Veckatimest, ultimately filing it away for reconsideration a year or so later. But one album in particular was inescapable - Neutral Milk Hotel’s In The Aeroplane Over The Sea. More than any other image, the cover of that album clarified to me the meaning of “meme. For reasons not completely clear (to me and, most likely, anyone), it was posted absolutely everywhere. The key was that it straddled every possible qualitative assessment - the music was at once beloved and a joke in itself; it was impossible to tell if anyone was being sincere about the album art, no matter their opinion of it (exacerbated by constant, unbelievably intense arguments over whether the central figure’s head was a drum, a slice of a potato, or something else entirely). The ubiquity of the album, and simultaneous presence of every possible opinion of it, is /mu/ in a nutshell.

There’s an element of this that I haven’t mentioned, one that’s hardly unexpected given 4chan’s reputation: the omnipresence of hate speech (and everything else that is unsavory). Regardless of which board you were on (much more so on /b/, somewhat less on /toy/, for discussion of Toys, or /an/, for Animals & Nature), it was inescapable. Being one of the more popular boards, /mu/ was generally reflective of the 4chan userbase at large, i.e. very much the internet’s trash heap. If you’ve spent any time online, you can likely guess the sorts of responses that one would find in threads about rap, jazz, or female musicians of any sort; more particular to 4chan was the appendation of the suffix “-fag onto nearly any word, categorizing people much as one might use “-core to classify music. Between naivete and rapid-onset desensitization, I might have registered 10% of the rampant anti-Semitism at most.

In an essay that I linked last week, Brian Feldman claimed from experience that “it was remarkably easy to discuss things like video games and memes with other users who casually deployed slurs without also picking up the language [himself]. While this is true, and is absolutely a standard to which people should be held, it is every bit as easy to convince yourself that you’ve fully separated your online, anonymous existence from your IRL consciousness, and that that’s enough. I can’t remember a single post that I’ve made on /mu/ (save for this one just now), but I know that I participated eagerly in this sort of shit, that I typed things that I would never have said, and that I didn’t give much thought to the obvious contradiction there. More than anything else, this has repeatedly given me pause over the past few years as 4chan has emerged as the nerve center of online radicalization that spawned the alt-right. My convictions, or at least my ability to correctly attribute my own misfortunes, being somewhat more developed than at 15, it’s easy to place some (a lot of) distance between myself and, say, the nouveau constituents of the white supremacy movement. I’d like to think that my character, my being raised right, would triumph regardless, but the near-universal origin story (affirmation-seeking, bored at school, upset about girls) rings entirely too familiar for me not to wonder.

I should mention that I was first told about the site by something of an IRL analogue of it - a friend of mine named Paul Cho with whom I would spend the first half of high school hanging out, playing video games and, uh, getting into heated arguments about “race science until I realized that I’d rather do neither than both (I kept going on /mu/ though). I’ve since met quite a few people, pleasantly functional and of diverse backgrounds, for whom /mu/ was just as much of a gateway into musical obsession (that exposure to the site is so easy to pick out from musical taste alone is another thing that concerns me re: the indelible marks the site leaves). It’s almost enough to make me believe that the board is harmless, but I know that’s not true - I’ll settle for “unparalleled. I don’t pop in too often anymore, but when I do it’s more nostalgic than anything else. At this point, it’s impossible to plot the past nine years of my life without the time I spent there, and I’m not sure that I want to.

* Thinking back to a mix cd that I made to be played in the car(!) of someone I was seeing at the time, the list must surely have included:

- El-P - I'll Sleep When You're Dead (The Overly Dramatic Truth)

- The Decemberists - The Hazards of Love (A Bower Scene)

- Silversun Pickups - Swoon (It's Nice to Know You Work Alone)

- The Smiths - Strangeways, Here We Come (Stop Me If You Think You've Heard This One Before).