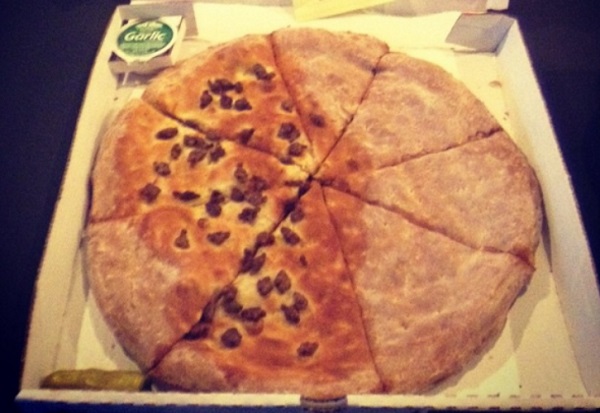 I was a pizza delivery guy at Domino’s for two straight summers (2011 and 2012), but this essay is about the first one. Right before I started, my parents realized that I was smoking weed; I was grounded except for getting that paper and hanging out with my first serious girlfriend, whom I had just started dating. In other words, I had the exact degree of autonomy (perhaps more) than I would have otherwise expected. It was the summer of SBTRKT and James Blake but also, like, Matana Roberts - with the ability to listen to the music of my choice for essentially the entire workday (a theme), it was eventually the summer of just about everything.

The first thing that you learn after taking a pizza delivery job is the sad demographics of the thing: unless you count me, my store had exactly zero virile young bucks of the "you ladies ordered a medium pizza with extra sausage?" variety from the internet videos, instead skewing heavily towards 40+ year olds either supplementing regular work with weekend day shifts or tragically caught in pizza delivery as a career. Of the crew, I was relatively uniquely qualified in my lack of any other responsibilities whatsoever, and so I ended up working the late-night shifts.

That’s how I met my pal Canaan Hill. Canaan was my equivalent on the pizza-making side of things. I never knew a ton about him, but during one of my first shifts he revealed himself as a big /mu/ user (by using the word "implying" a lot, I think) and shortly thereafter we had made a thing of buying a pair of choco tacos from the Wawa down the street and hanging out in front of the Domino’s listening to music blasting from my car stereo for several hours after closing. I’d do that five nights a week, get home at 3am, and stay up until 5 or so listening to more music and catching up on Breaking Bad or whatever was important in those days. It’s in exactly that state that I first listened to Watch the Throne, Thursday (the night before leaving for college), and, the following summer, Channel Orange. I don’t think my parents ever believed my truthful accounting of what I’d been doing when I work them up coming home.

I’ve talked a lot about the transcendent experience of perfect visual and sonic synergy, especially while driving, and that (like anything the above may have reminded you of), traces its roots to my job at Domino’s. In an insane stroke of luck, I applied to the cushiest of Williamsburg’s three locations, having no responsibility for William & Mary nor a service area consisting mostly of rich gated neighborhoods. Mine was the location that was responsible for the hotels, Near-exclusively, the individual customers were wealthy enough and totally ephemeral, socialized enough not to let the latter prevent them from tipping according to the former. The most frequent deliveries by far went to the Days Hotel (called the Days Inn seemingly everywhere else on Earth), a nifty building with entrances and elevators on either end that allowed you to bypass the front desk (important, as we were supposed to get a signature for each delivery to the hotel and deliver the front desk attendants a large cheese pizza with the topping of their choice for every ten signatures).

The Days Hotel lay at the other end of Penniman Road, a rarely-patrolled byway with speed limits belying the number of houses along it (at one point, there was also a shortcut through an industrial park, along which you could drive fast as hell). One day, I was taking a delivery along Penniman right before an oncoming and very classic Atlantic summer storm, the sky cleaved perfectly in half between normal blue and some exquisite grey clouds. I was driving directly along the dividing line. It was like nothing I’d ever seen, and only the closing scene of Take Shelter has compared since. I’d never clocked myself along Penniman, but I know that it took seven minutes and forty-two seconds at full throttle because this was playing. My mind was thoroughly blown. It’s a feeling that I’ve been chasing ever since.

I came back the next summer, but it wasn't nearly the same. In all seriousness, the closest comparison that I can draw is to how old people always talk about the hollow revival of the Summer of Love in the years after the one true one. The manager, a kinda lame dude who nevertheless got me into comics and green tea frappuccinos from the adjoining Starbucks, had been fired for general incompetence or something. Canaan had been transferred to the William & Mary branch, and when I stopped by late one night the cashier said that he and his girlfriend had had a kid and moved to Missouri(?). Ronnie, a high school history teacher-looking dude who spent every Friday night delivering pizzas so that he could afford to die in Williamsburg, was still there. I was working two jobs and don't remember much about that summer except for the following:

(1) driving down to Virginia Beach on an unseasonably cool and foggy August day to pick up some stereo equipment I'd bought on Craigslist, listening to Channel Orange there and back;

(2) we had two new employees, Josh and Faith, who met, began dating, and got married all within the one summer;

(3) I quit for good just in time to take a quick circumnavigational trip around Virginia. It was the first of many dumb, solitary, thoroughly enjoyable road trips, which are kind of my thing now. I stopped in Asheville, NC to see the Dirty Projectors with some friends, and I remember listening to 2 Chainz "Extremely Blessed" and Shlohmo's remix of LOL Boys "Changes" for hours/miles on end. I went to a baseball game in Richmond with my first-year roommate, who showed me this song "Turn on the Lights" by Future.

I still have (i.e., I stole) the big Domino's sign that would go on top of my car. When people would come to Williamsburg, I'd use it to bluff my way into one of the gated communities so that we could look at the huge riverside houses of people who usually tipped in loose change.